Cai Guo Qiang: From Quanzhou to the Guggenheim (and back)

I’m planning on blogging with more of a focus on where I live, Quanzhou, Fujian. I have not come up with a catchy title yet for this, like “QZ Bang” or “That’s Quanzhou”. Suggestions welcome.

Cai Guo Qiang is pretty hot stuff in the world of contemporary art. He’s getting a retrospective at the Guggenheim, which pretty much confirms he’s ascended and his stuff is ludicrously expensive. The retrospective will be from February to May 2008, after which it’ll be at the National Museum in Beijing during the Olympics, and then on to Tokyo and the Bilbao. So he’s doing alright. Cai lives where I grew up and I live where he grew up – New York and Quanzhou, Quanzhou and New York. Haven’t run into him yet, but I imagine I might if I stick around, since the New York Sun mentions “Mr. Cai also has a hand in China’s current museum-building boom, collaborating with the architect Norman Foster to build a museum in his hometown of Quanzhou.”

And behold, Norman Foster and Cai hangin’ out with the local attraction “Giant Lao Zi Statue”. Foster and Partners is also responsible for the new Beijing Airport, London City Hall, the Reichstag… big time stuff. Cai’s site says the Quanzhou Museum of Contemporary Art will open in 2009, though local friends say it might be more like a private gallery. Cai is still not beloved in China because of his replicas of the “Rent Collection Courtyard” sculptures (created by the Sichuan Art Academy) for the 1999 Venice Biennale. It really pissed off alot of Chinese critics who called him things like a “banana artist” who belonged to the “green card tribe”, according to Cai. Legally he stood on firm ground – Chinese courts said that copyright could not be granted to Cultural Revolution era works (which I find really fascinating – anybody know more?).

Cai Guoqiang has kept ties with Quanzhou for a while though. Here’s one of his gunpowder works at a local museum. The subject of both the museum and the artwork is quite interesting, especially in light of some other Cai Guoqiang work. I’ll blog about it later. 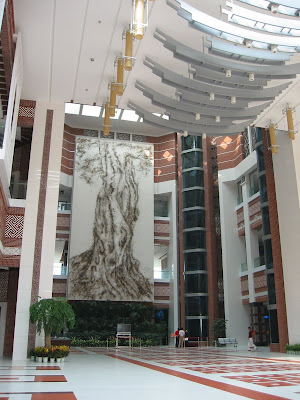