Reading David Bandurski’s ever keen observations over at China Media Project in “As China shout its line on Tibet, is anybody listening?”, I got struck by deja vu all over again. Three times.

And so on. Which, of course, is echoed repeatedly in English as Tibet to set “Serf Liberation Day”, or minor variations thereof. You can even read about it in Esperanto, along with full coverage of the two conferences last month. Which reminds me of my all time favorite bit of heavy handedness from Chinese English media, the special report page Xinhua produced titled “Condemn Falun Gong”, in which the headlines report all sorts of groups doing just that: a forum, overseas Chinese, the students of Chongqing, “people of all circles”, and then, so as not to leave out people without circles, simply “people” condemn it, in case you weren’t sure if you were invited to join in the festivities.

Bandurski then reminded me of the news that China is investing 45 billion RMB in CCTV, Xinhua and People’s Daily to “accelerate “going out”” and go global with its news operations to set media agendas. The maximum any one of them can get is 15 billion, which is alot more than CCTV-9 has ever seen, but wait a minute. I’ve heard most of this before. Li Changchun has been saying more or less the same things about “going out” since 2003, albeit I’m guessing he’s not referring to the Three Represents as often. The same goes for soft power – just because America finally has a president who likes Joseph Nye doesn’t mean the Chinese just discovered him too. It’s been a perennial favorite for years, and been applied to everything from CNN to Korean soap operas, and always boils down to “China doesn’t have enough”.

First of all, one bit going around is that China is inspired to start its own Al Jazeera. That was something heard in 2004 and repeatedly thereafter from Li Xiguang, Tsinghua professor and at that time newly appointed director of CCTV International. Li was behind the relatively tame revamp of CCTV-9 at the time, when they hired Edwin Maher, and launched Spanish and French language channels (and five years later, how many people watch those?).* Now, CCTV is on the verge of launching Russian and Arabic channels, and plans to have seven different languages on 11 channels by 2012. I count six including Mandarin. Is there a Cantonese CCTV, or are they going to launch the world’s first global 24 hour esperanto network? Point being, that 15 billion RMB gets sliced 11 ways. Most importantly, what kind of strategy is this? Al Jazeera made its mark primarily through exclusive journalism in one language – it’s own – and then expanded into English. At this rate, the Big Underpants building in Beijing is going to be the Tower of Babel, or worse resemble the EU’s translation center.

Besides this lack of focus, there are other reasons China can’t have an Al Jazeera:

Finally, Bandurski also points out that China shipped a happy Tibetan monk all the way to Canada to say how not mad he is about anything. Well, three years ago China was building the largest embassy in the U.S., designed by I.M. Pei, and their ambassador had started gladhanding people in diners in Iowa. That didn’t pay off huge either.

China may have a respectable global news franchise yet, but throwing money around and talking about copying models that don’t fit isn’t going to make one.

*Li Xiguang’s speech on World Press Freedom Day in 2004 about coverage of the Iraq War by Chinese jounalists is fascinating. He basically savages CNN and Fox for spewing U.S. propaganda, but also savages the Chinese government for essentially “turning over” state TV to Rupert Murdoch.

UPDATE: SARFT said today that CCTV International’s four existing stations now reach 100 million households. I’ll just point out two things: first, reach is not the same as viewers or trust, and second, if that’s the case it wouldn’t make much sense to spend the 45 billion on a new network, but rather in integrating Xinhua’s overseas bureaus with CCTV International. Will turf wars and red tape make this difficult? Who knows. World War I era photo of Chinese woman’s feet from the Otis Historical Archives at the National Museum of Health & Medicine in Washington, D.C.

END_OF_DOCUMENT_TOKEN_TO_BE_REPLACED 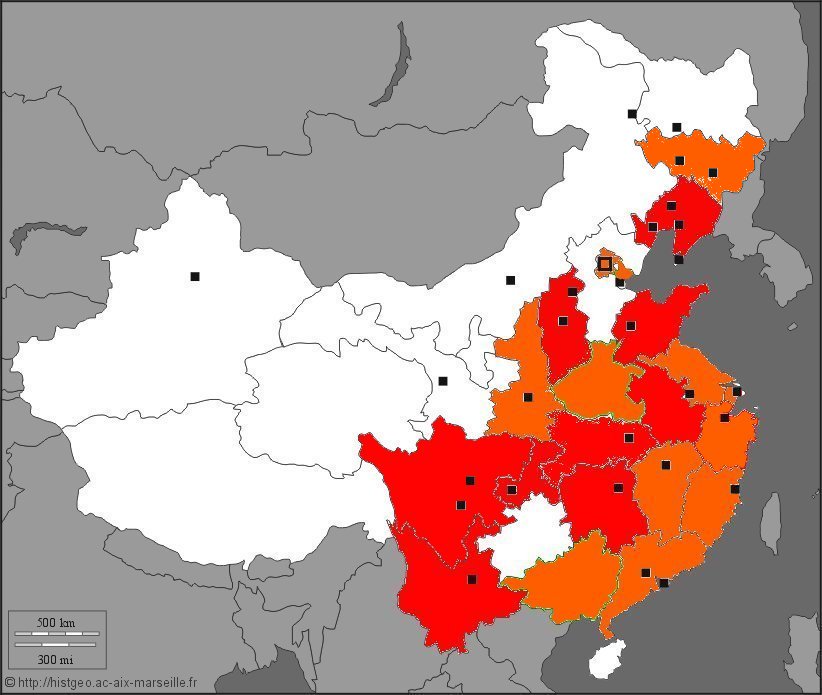 With conflicting reports about YouTube access in China tonight, here’s the breakdown from reports to the unfortunately named Herdict (Herd + Verdict, get it? neither did I…) censorship reporting tool:

Herdict doesn’t yet generate country maps, but the ISP providers usually name the province, and so its not hard to color in a map like the one above. Green means all reports (in every case, only one) said YouTube was accessible, Red means all reports were for inaccessible, and Orange means there are reports of both. 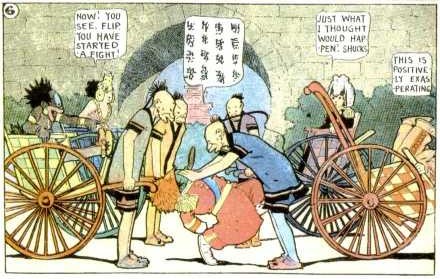 From ComicStripLibrary.org, two Little Nemo strips from consecutive Sundays in December 1912, in which regular characters Flip, Dr. Pill, and The Imp visit China, and Flip attempts to kidnap Emperor Puyi.