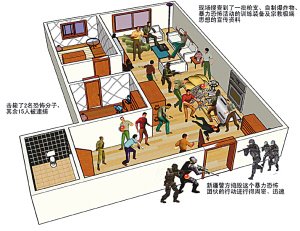 The third week of February was awfully busy for Xinjiang terrorism news.

First, there were reports of a Uyghur terrorist cell being raided by the police in Urumqi, Xinjiang’s capital. The initial report appears to have been in Singtao Daily, the Hong Kong-based international Chinese language newspaper chain, on February 14th. It said that 18 were killed on February 4th in a huge police assault on an apartment in the Happy Gardens (幸福花园) complex, and two security officers were also killed in the full-scale gun battle. The report was subsequently carried over in smaller web publications on the Mainland like Zaobao, but officials would only confirm that there was an incident, nothing more.

Four days later, on February 18th, Global Times reported that the attack, according to an unnamed government official, happened on January 27th, at the Happy Gardens apartments, two terrorist suspects were killed and another fifteen captured. No police officers were injured, contradicting the previous report. Found at the scene, it was reported, were firearms, homemade explosives and instructive material from “external terrorist organizations”, and the suspects consequently “confessed to their crimes”. The article further mentioned that “the incident reminds us that security concerns are not limited to the Beijing Olympics”. The Chongqing Evening Daily website carried an article the following day from Xinjiang Daily that also included a rendering of the apartment assault (above), though it doesn’t look very authoritative with its two cops and 17 terrorists. A Global Times reporter also investigated the scene, finding little but noting that a local police official may have been removed from his position because the suspects were “right under their noses”. 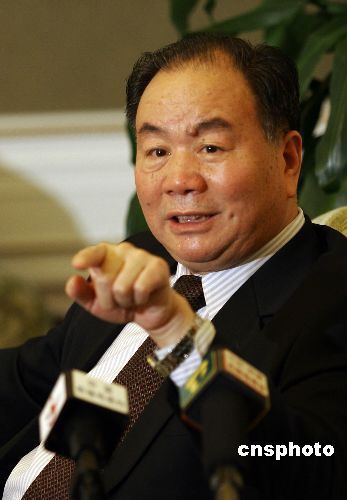 As all this was going on, it was also reported that the Chinese military was rehearsing to combat biological and nuclear threats, while the Hong Kong pro-PRC paper Wen Wei Po said there were fears of such attacks from East Turkestan groups. Even more significantly, Xinjiang Party chief and all-around top guy Wang Lequan gave an extensive interview on Phoenix TV (video below). Notable highlights included

1) Opening with footage of Interpol Secretary General Ronald Noble warning of terrorist attacks at the Beijing Olympics, and FBI Director Robert Mueller speaking of his confidence in security during the Olympics, followed by the invocation of September 11.

2) Footage from the video of the “Hotan Conference” in 1996, where the Allah Party, or Hizbollah, of East Turkestan supposedly took oaths to sacrifice themselves to establish an Islamic extremist independent Xinjiang. Xinjiang scholar Yitzhak Shichor saw the same footage(PDF) as part of a Chinese documentary shown to him in 2002, and said of this and one other organization (The Party of Islamic Reformers) “At best, they are – or were –small and loosely organized of little operative value. At worst, they may have been a figment of Chinese imagination or even invented by Beijing. When the Chinese issued their list of “East Turkestan terrorist organizations” on December 15, 2003, these two “parties” have not been included.15 Are these terrorist organizations or not? It seems that Beijing has some doubts, at least.”

3) That after the Yili incident, the East Turkestan Independence Movement launched an assault on vehicles carrying prisoners with a “squadron of 40-50 bicycles”, leaving security forces no choice but to open fire and kill one person. “Voice of America said we killed 1000 people, blahblahblah, which is nonsense, simply not the case.”

4) Wang Lequan puts great emphasis on Document 7, a Politburo directive on Xinjiang stability drawn up in 1997. Before this, he says, the answers to such questions as “What is normal religion, what is illegal religion, what are reactionary religious forces, in the past all this was unclear”. The document clarified, first, that the principle of autonomy must be upheld, but foreign religious influence cannot be permitted. “Secondly, we must always remain comitted to the separation of church and state, not allow religious interference in adminstrative, judicial activities, things like education, health, the One Child Policy, these things…” Wang Lequan seemed to find nothing contradictory in advocating the separation of church and state and simultaneously defining “illegal religion”.

5) Wang Lequan tells that he was target #1 on an assassination list.

6) He wraps up with the tale of Rebiya Kadeer, who he claims funded external separatist forces (doesn’t say who), met with a veteran terrorist named Aisha(?) in Turkey, and spread both secret intelligence and terrible lies to people in the United States, and they released her from prison because she had repeatedly given self-criticism, repented, and there were lots of reasons. It’s not terribly clear. Everybody who supports her and her Nobel nomination, he believes, is being fooled. Most perplexing is Wang Lequan’s rambling last sentence:

So, coincidence a terrorist raid is revealed at the same time that Wang Lequan makes a rather rare extended appearance and the PLA steps up anti-terrorist training while PRC media in Hong Kong plays up the Uyghur separatist threat?