China’s War on The Unexpected? 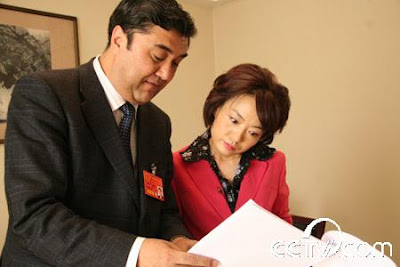 Xinjiang Acting Chairman Nur Bekri during a CCTV interview this weekend
A day after leading the National Peoples Congress in pledging to strike harder against “the three evil forces of terrorists, separatists and extremists”, recently appointed Xinjiang Acting Chairman Nur Bekri said today that an “air disaster” was foiled on board a flight en route to Beijing from Xinjiang’s capital Urumqi. China Southern flight flight CZ6901 left Urumqi at 10:35, and was forced to land at Lanzhou, capital of neighboring Gansu Province, at 12:40 Friday, according to China Daily.

Nur Bekri was quoted in China Daily and Reuters as saying “”Who the people involved in the incident were, where they were from, what their aim was and what their background was, we are now investigating,” “Fortunately our air crew took resolute measures, discovered and put a stop to this action promptly. All the passengers, crew and the aircraft are safe,” and that it was “up to the police department to verify” whether it was a terrorist plot, “but we can be sure that this was a case intending to create an air crash.” An anonymous source also told Reuters that two passengers were arrested and an “inflammable material” was found in the toilet.

But what if this was a false alarm? Would the Chinese government admit so, or would they stick to their guns about it being an “attack”? Security expert and internet celebrity Bruce Scheneier has written repeatedly on his blog and for Wired Magazine about what he calls “The War on The Unexpected”, pointing out how US War on Terror policies often makes terrorist threats out of molehills, and authorities have difficulty walking them back:

Watch how it happens. Someone sees something, so he says something. The person he says it to — a policeman, a security guard, a flight attendant — now faces a choice: ignore or escalate. Even though he may believe that it’s a false alarm, it’s not in his best interests to dismiss the threat. If he’s wrong, it’ll cost him his career. But if he escalates, he’ll be praised for “doing his job” and the cost will be borne by others. So he escalates. And the person he escalates to also escalates, in a series of CYA decisions. And before we’re done, innocent people have been arrested, airports have been evacuated, and hundreds of police hours have been wasted.

This story has been repeated endlessly, both in the U.S. and in other countries. Someone — these are all real — notices a funny smell, or some white powder, or two people passing an envelope, or a dark-skinned man leaving boxes at the curb, or a cell phone in an airplane seat; the police cordon off the area, make arrests, and/or evacuate airplanes; and in the end the cause of the alarm is revealed as a pot of Thai chili sauce, or flour, or a utility bill, or an English professor recycling, or a cell phone in an airplane seat.

Of course, by then it’s too late for the authorities to admit that they made a mistake and overreacted, that a sane voice of reason at some level should have prevailed. What follows is the parade of police and elected officials praising each other for doing a great job, and prosecuting the poor victim — the person who was different in the first place — for having the temerity to try to trick them.

It’s pretty easy to imagine something like this happening in China, and even worse there’s even less investigative journalism or government transparency to reveal that there was ever a mistake in the first place. China has hardly any publicly available evidence of the various Xinjiang terror incidents reported over the years, and have yet to publicly identified the identities or confessions of terrorists caught in either last years cave raid or the more recent apartment raid. This is surprising for a country where its not uncommon to hold public rallies where convicted criminals are displayed and “the masses cheer”. Given the recent wave of Chinese media reports about being vigilant in the face of Xinjiang terrorism in the run-up to the Olympics, its easy enough to imagine that a paranoid flight attendant on a flight from Urumqi might mistake hand cream left in the toilet for a bomb. The plane makes an emergency landing and the affair is forever after included as a “terrorist incident”. One can be just as skeptical that incidents like the cave raid and the apartment battle were in fact against illegal miners and drug dealers, which can all to easily be lumped under “terrorists” given China’s sloppy and probably purposely vague language in defining the “three evil forces”. Reuters and AFP would be wise to use even more skeptical quotation marks when reporting on “alleged” “attacks”. At this point I’d suggest a 2:1 word-to-“word” ratio.

UPDATE: As an added note, with the exception of Phoenix TV, which reported 8PM local time on Sunday (when foreign outlets and the China Daily English site were breaking it), no Chinese language internet site appears to have reported this news until Monday, roughly 10 hours later. Xinhua’s Chinese language site still appears not have an article on it. Does this mean domestic media was told to sit on the story because of the NPC? They sat on the apartment raid story for a couple of weeks before it was broken to a pro-PRC HK Daily as a rumor, and they could’ve kept it hush hush. In the past China has had a schizophrenic approach to publicizing Xinjiang terrorism – on the one hand, it allowed them to seek legitimacy for the conflict under the rubric of the GWOT, while on the other it contradicted claims that it was all under control. One would think they had, after that experience the past few years, considered a media strategy for publicly releasing information, especially to the foreign press, about incidents during the run up to the Olympics.

2 thoughts on “China’s War on The Unexpected?”