Did Wang Lequan Really Say There Was A Plan To Attack The Olympics? 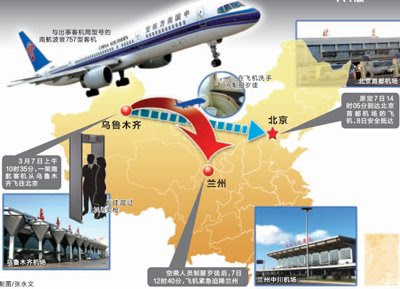 Right on the heels of banning liquids in government officials, the Civil Aviation Administration of China has banned liquids on planes as of Tuesday, March 11, with the exception of baby formula and prescription medication. Details sketchy at the moment, though AVBuyer.com*, the website behind this weeks China Southern’s Xinjiang CYA press release blitz, says that there are plans to install liquid scanning machines in all major airports, most likely the already approved Nuctech‘s THSCAN LS 8016 X-Ray Liquid Security Scanner. 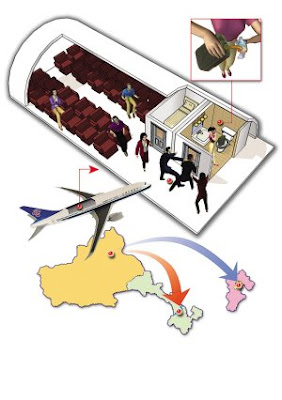 Meanwhile, news on the alleged airline terror plot continues apace, the major new bits being more information from two people who claimed to be passengers, lots of confusion, and snazzy graphics recreating the scene. The best has to be this one depicting the 18/19 year old suspect being apprehended while wearing a traditional Uyghur dancing costume. Subtle, guys. 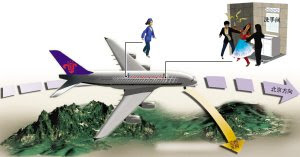 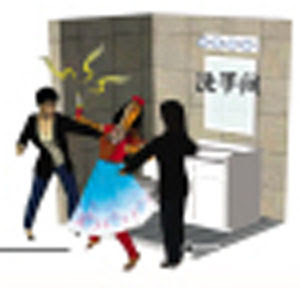 But more concerning is that alot of facts seem to be getting confused, or at least confusing. From the beginning, many English news outlets have been reporting that Wang Lequan said on Sunday that the “terrorist” group captured in January aimed “specifically to sabotage the staging of the Beijing Olympics”. The source of this appears to be Xinhua’s English website which reported that Wang Lequan said “Obviously, the gang had planned an attack targeting the Olympics,” a report that the Telegraph’s Richard Spencer said had been removed but appears to still be online in at least one place. Xinhua also quoted Wang saying “The Olympic Games slated for this August is a big event, but there are always a few people who conspire sabotages. It is no longer a secret now,” and “Those terrorists, saboteurs and secessionists are to be battered resolutely, no matter what ethnic group they are from.” But is this what Wang actually said in Chinese?

According to this transcript of the press conference on the China Radio website, no. Here’s what Wang Lequan said in response to a Reuters reporters** question. Translation criticism and tips always welcome. 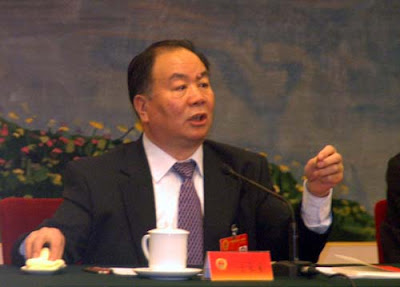 Reuters reporter: We know Xinjiang has some separatists who plan to attack the Olympics, why do they want to and is it related China’s policy in Xinjiang?

Since the beginning in Xinjiang there’s been a small minority that has been hostile. Of course the Olympics is a big deal, but some people have tried to ruin it by any means necessary in the run-up to these Olympics. This is no secret, they’ve publicized it internationally. But the fact is, by this very act they meet with the opposition of peace loving people all over the world. The governments of every nation of the world have already made this crystal clear, when it comes to politics in sports, everyone is opposed, its unpopular.

Xinjiang has “East Turkestan”, “Three Evil Forces”, namely “religious extremist forces, minority splittist forces and violent terror forces,” domestically they are a tiny minority, primarily they are outside our borders. They have one representative, Rebiya [Kadeer], who goes around the world clamoring, instigating, she doesn’t want us to successfully host the Olympics. But this is only a fantasy, they have no significant power, they can only go around talking nonsense. Within our borders there’s only a few of these people, that’s really the situation.

Not long ago, the Xinjiang PSB recently cracked down on a cell. They were making explosives, grenades, wanted to cause destruction, in the course of their preparations we discovered them. When we launched a raid, they attacked us with three grenades, and seven officers suffered minor injuries.

There is a small minority determined to interfere with the Olympics. First, we wish this wasn’t the case, [but] second, we don’t fear facing the same circumstances again. Our principle is to increase our work across the board, these people who want to cause destruction, we will resolutely crack down on them during their planning stages!

It doesn’t appear that Wang Lequan said “Obviously, the gang had planned an attack targeting the Olympics,” or anything else directly linking the captured group to a planned attack on the Olympics, at least not at the press conference. There may have been off the cuff remarks made elsewhere, but there is no evidence of this. If this is the case, then Richard Spencer’s comments about China retreating from its claims of an Olympic terror threat have two problems: one, not all the English reports on Wang’s comments were pulled off the ‘net; second, Wang never said it. And not just Mr. Spencer, but the many repetitions of these quotes floating around the web [without clear attribution either, I might add].

Xinhua is giving less coverage (and certainly not continuing wall-to-wall) of the terror stories, but I don’t think this is because the government is “retreating from its claims.” As official state media, they are no doubt under very specific orders about what the narrative for the National Peoples Congress is to be. That means that the words of Hu Jintao and Wen Jiabao cannot be eclipsed, not by any sexy stuff like terrorism, unless Hu and Wen say it. There are grand five year plans and slogans that have to be at the top of the page, terror plots be damned. Meanwhile, alot of information is coming from Hong Kong (Phoenix TV, Sing Tao Daily, Wei Wen Po, Da Kong Bao). Hong Kong doesn’t have the heavy hand of Mainland censorship, and has a media market more directed to selling papers (read: sex and violence). Foreign media, likewise, sees a hot story in tales of terrorism and the Olympics (hence mentioning the Xi’an bus kidnapping in the same breath as Xinjiang terrorists, though we know the would be bus bomber was a Han man named Xia Tao from the Xi’an Youliang district work unit who apparently had a grudge with local police), and so they are interested in continuing to follow the story as well. It’s not so much that Xinhua is signaling that the government cannot or will not back up their claims, but that they want attention focused elsewhere.

Spencer does raise a good point, however, wondering what the Chinese government is trying to say to the world. Xinhua did, after all, quote Wang Lequan saying that the group was targeting the Olympics, though his point may have been that they are cut from the same cloth as those who would like to see the Beijing Olympics ruined. From my perspective, its important to remember that Wang Lequan is not a typical provincial leader. Xinjiang and Tibet are special cases in the Chinese government. Wang Lequan is head of the Xinjiang Production and Construction Corps as well as provincial party chief and a member of the Politburo, giving him a unique position. He is the replacement for Wang Enmao, who controlled Xinjiang for nearly thirty years [except when he fell from favor during the Cultural Revolution]. In many ways he is more of a strongman than his peers, and security and “ethnic unity” in Xinjiang have been the obsessive focus of the government for years. While he may not have made a direct link between this attack and the Olympics, he certainly hasn’t been afraid to mention the Olympics as context, and he’s made more than one disparaging remark about Rebiya Kadeer, which has roughly the same effect internationally as his closest peer, Tibet Party Secretary Zhang Qingli’s rough comments about another figure associated with the Nobel Prize, the Dalai Lama. It seems that this sort of less-than-diplomatic talk comes with the job, especially for a domestic audience, and foreign audiences are not the concern of these officials. Add Time Magazine’s quote of Russell Leigh Moses of the China Center in Beijing that “this is exactly the kind of thing that happens around the time of the National People’s Congress… cadres who don’t necessarily get noticed a lot normally want to be seen as publicly carrying out the orders of the central government” and I think you get a pretty good picture of what’s going on.

Also reported recently: China Southern CEO Liu Shaoyong told Phoenix TV that this hijacking was different from others as it was “politically motivated”. I think he needs to read my previous post, An Incomplete History of Chinese Plane Hijackings. Guangzhou Daily also tried to interview Urumqi airport security personnel, but didn’t get very far. And Richard Spencer, who is making a great effort to figure this whole thing out, has also discovered that Sing Tao Daily in Hong Kong is reporting that the Uyghur girl on the plane was sent abroad for “training” when she was six. Just remember, Sing Tao is a pro-PRC paper that first reported rumors of the raid in Urumqi that Wang Lequan was discussing, but managed to get some of the facts wrong.

———————————————————–
* An interesting aside: AVBuyer has apparently plagiarized ESWN’s translation of Southern Weekend’s Searching for Eyewitnesses for CZ6901 Incident, and not credited the original author Ding Bu either.

** It is not clear who the Reuters reporter was, or if the original question was in English. If it was, this question may not be clearly translated. It sounds like its been harmonized a little.

6 thoughts on “Did Wang Lequan Really Say There Was A Plan To Attack The Olympics?”