SchizOlympics: The Legion of Doom

Since the Chinese government has begun not only saying that the Dalai Clique organized the violence in Lhasa, but that he’s done it with the help of the Xinjiang terrorist group the East Turkestan Independence Movement. They’ve tied the Dalai Lama to Chen Shuibian in Taiwan in the past, as well, and there’s a tendency to see some conspiracy amongst people who are perceived as “anti-China”. It all reminds me of Saturday morning cartoon supervillains, and the Dalai Lama seems a dead ringer for Lex Luthor, so let’s just imagine… China’s Legion of Doom! 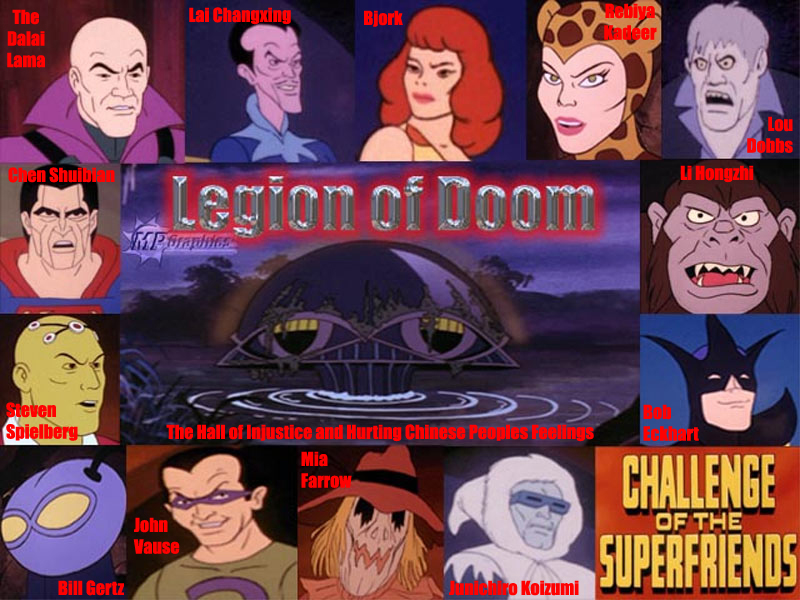 Sinestro = Lai Changxing (he was once a good guy!)

Giganta = Bjork (she seems small and cute, but then becomes enormous and destructive)

Black Manta = Bill Gertz (cuz Black Manta is Aquaman’s enemy, and Gertz writes about the naval threat, and whatever its Black friggin Manta)

Braniac = Steven Spielberg (looks pretty smart dropping out when he did, right?)

Bizarro = Chen Shuibian (he’s like some sort of evil reflection!)

4 thoughts on “SchizOlympics: The Legion of Doom”