Mutual Respect? It Must Be Some Kind of Trap…

Chinese netizens have been furiously seeking the guy who tried to grab the Olympic Torch from Paralympian Jin Jing in Paris. An Internet manhunt was launched and pinpointed a Tibetan man in Utah named Lobsang Gendun. First problem? It’s not the right guy. Utah TV station KSL manages to confuse London with Paris in the article (another example of why Chinese nationalists are taking errors by US media waaaay too seriously), but its definitely not the guy whose name, address, phone number, Google Map location, pet peeves and favorite color have been splashed across Anti-CNN and other Chinese bulletin boards. Oh, and wanted posters. 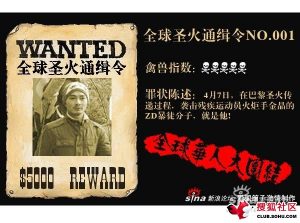 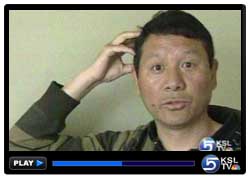 This isn’t the Tibetan You’re Looking For

His phone began to ring in the middle of the night. At first, they were hang-ups. More calls followed with threatening and obscene messages. Messages left on his answering machine include, “Hey, I wish you to die and go to Hell (obscenity),” and, “Please remember that if you want to be an enemy of the whole Chinese people, then you are doomed, OK?”

The calls kept coming, even during our interview this afternoon. Gendun has also received more than 100 threatening emails.

All of this is because they think Gendun is the man in a picture taken as the Olympic torch passed through London. A protester tried to take the torch from a girl in a wheelchair.

Gendun says he’s responded to some of the emails, and even tried to talk to some of the callers to explain they’re misinformed. “Sometimes they will just swear at me, and I say, ‘Thank you, thank you’. That’s all I say,” he told us.

The calls are coming from all over the world, including China and New York. Gendun doesn’t know how he got mistaken for the man in London. If the calls continue, though, Gendun says he’ll go to the police.

Well, even better than going to the police, he’s gone to the media, and its trickling into the Chinese forums. Unfortunately, its still in English, so the only comment response in this particular example is 看不懂 (I don’t understand). Hopefully others are getting the word out in Chinese. On my scorecard, this ought to make the Pro-Tibet protesters and the angry Red Guard 2.0 1-Love. One grabbed the torch and made an ass out of himself, the others went on an Internet manhunt and issued death threats. Errr… ok, maybe Pro-Tibet is actually coming out ahead. Well, some on Anti-CNN are saying they owe the man an apology (Charlesliu – the same Charles Liu?). Then again, some still think its ok to make death threats as long as you have the right person.

But hang on a minute! One Chinese blogger, Babaxiaoqian, thinks that the torch grabber might not even be Tibetan at all. Oiwan Lam at Global Voices Online points to Xiaoqian’s post where he carefully dissects two photographs of Chinese and Tibetan protesters, included the torch grabber, walking side by side. He finds it terribly suspicious that some have Chinese flags and others Tibetan flags but they’re not shouting or trying to assault one another. They’re actually calmly walking down a narrow path in a mixed group. Among them is the torch grabber. Clearly, this is confusing for Babaxiaoqian.

You’d Think They All Respected Each Others Rights or Something!

Xiaoqian, as one commenter points out, seems to be applying his cultural perspective to another. It seems no stretch of the imagination to me that Pro-Tibet and Pro-China people might walk to the route on the same path without fighting or treating one another like the devil, because in my experience no one questions the other sides right to exist or say unpleasant things in a place like Paris (unless they’re foreign and saying anything in French, but I digress) and frankly, they have more important things to do with their time than hate you 24-7. But in Babaxiaoqian’s mind, they’re supposed to be blood enemies, and there’s no way they could co-exist. They’re like “fire and water” to him, and ought to be engaged in a struggle to complete annihilate each other, even if that means they’ll never even make it to the torch in the first place.

Recently this cartoon has been making the rounds, illustrating the sort of total war that some Chinese netizens are engaged right now over Chang Ping’s commentary on the Tibet issue, and that it seems Babaxiaoqian expects is the way these Paris protesters ought to rumble.

Now This is How You Settle Differing Opinions, France. Pay Attention.

Chang Ping had the absolute gall, apparently, to point out certain Chinese netizens “even began in the opposite direction from the first place: They do not care if the news is objective and fair; they do not care if the media hold certain positions; biases are not totally unacceptable; rather, the key is just which side you are on… [they] have chosen to abandon their trust in objectivity and fairness and hence seek refuse in narrow nationalism. They draw the conclusion that talks of universal values are all deceptive tricks used to cover up underlying national interests.”

In response, Wen Feng at the Beijing Evening News, who is in fact Mei Ninghua (梅宁华), president of the Beijing Daily Group, vice-chair of the All-China Journalists Association, and director of Beijing’s Bureau of Cutural Relics, went ad hominem by calling Chang Ping a “trendy spicy chicken” and cried out:

The heart of the matter for which he [Chang Ping] was criticized was this: “Free speech intrinsically includes the freedom of mistaken speech and particularly the freedom to question authority. More frightening than rumors is the removal of free speech.” And he openly held this up as a universal value. According to his logic, “free speech” means that you can muddy the truth, fabricate facts, indiscriminately distort history, speak irresponsibly, “freely” rumor-monger, “freely” smear, “freely” toss about labels… I have never seen the western media enjoy that kind of freedom of speech in their own country.

Which leads Alan Baumler at Frog in a Well to ask “Are Chinese media people really this ignorant of the western press or is he just lying?” I have no idea what Wen Feng knows about Western media, but he clearly doesn’t know what he’s talking about – western media absolutely thrives off rumor mongering and smears. We even coin words based on them, like “swiftboating”. No one says the swiftboaters aren’t allowed to continue swifting – rather, they say that you shouldn’t believe them. Big difference.

As Baumler points out, there is something of a whiff of the Cultural Revolution in what he calls the “New Red Guard”, with “orthodoxy as the key political value” in some of the speech being used. I prefer the term “Red Guard 2.0” for the sort of netizens who have been hounding the guy who isn’t Lobsang Gendun, since they have Google Maps and websites and newfangled technnology. And I especially reserve that title those who have been targeting Wang Qianyuan of Duke University and even more terrifyingly her poor parents in Qingdao, all because she, a Han Chinese girl, crossed the picket line and ended up in a photograph standing on the Pro-Tibet side of one protest. Some people are publishing photos of the building and front door of her parents apartment as part of the campaign to catch the “race traitor”. It doesn’t seem much of an exaggeration to compare them to the Red Guard – issue them an armband tomorrow and they’re off to the races. 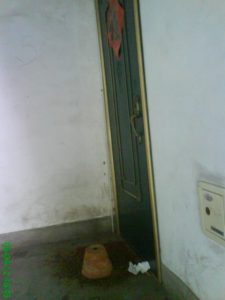 There’s a startling disconnect here about what constitutes “free speech” and what constitutes “violent speech”. Wen Feng believes the Western media has been engaging in violent speech by mislabeling photos of Nepali police and, I’ll grant is more serious, failing to make adequate distinctions between the Chinese government and Chinese people (though this isn’t exactly helped by the habit many Chinese people have of considering criticism of their government equivalent to a physical attack upon their own person, or constantly speaking for all 1.3 billion of their compatriots). Meanwhile, some of the people whose side he ends up on are actually making death threats and spreading insane rumors. 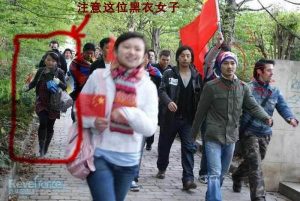 Which brings me back to Babaxiaoqian’s five point photo analysis of the marching order of these people, in which he discusses angles, their movement amongst one another from the first photo to the second, their lack of an air of mutual confrontation, and finds it suspicious. His additional evidence, by the way, is that one of the girls looks like a girl who on CCTV said her “dark skinned” friend, presumably Chinese but definitely not Tibetan though he looks kinda Tibetan, was offered 300 Euros by some dude to go with them and do who knows what. 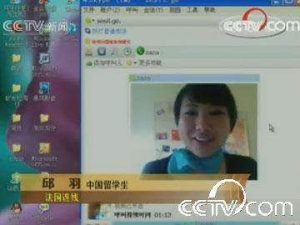 Why is this even being discussed? So a girl who kinda looks like a girl who said a friend with dark skin, who may be is the guy she, if it really is her, passed on a road going to the protest in a photo, was offered money by some unnamed guy who wanted him to do who knows what. Huh? How about something more straightforward, like contacting the Paris police about who the protester was? He was, after all, arrested. You might at least get the mans name. The implication here, though, is that the Dalai Lama clique must be outsourcing its attacks to unwitting dupes.

But I don’t want to go without pointing out this isn’t just happening on the Chinese side. The American conservative blogosphere is doing its own analysis of the same photos. Powerline asks if this is an Agent Provocateur?

It’s clearly the same guy, with the Tibetan flag on his head. Note that there are two others in the crowd who appear to be wearing Tibetan flags around their shoulders. Dafydd and the Chinese-Japanese bloggers suspect that the apparent Tibetan protesters mixed in with the pro-Chinese contingent–amicably, it seems–are agents provocateur, and that the “Tibetan” attack on the wheelchair-bound torch bearer was orchestrated by the Chinese government.

It seems both sides are seeing proof of their convictions in the fact that a bunch of young people managed to walk down a street without knifing one another. This sort of supposition on the American side actually gives ammunition to Mei Ninghua’s claim that “those people today shouting and parading around “universal values” and “freedom” are nothing more than using a grandiose phrase as an excuse to achieve their own shadowy ends.”

Should I rename the blog “Banging My Head Against the Wall”? I feel like doing that more and more these days.

28 thoughts on “Mutual Respect? It Must Be Some Kind of Trap…”