Warcraft Will Save Xiamen Netizens 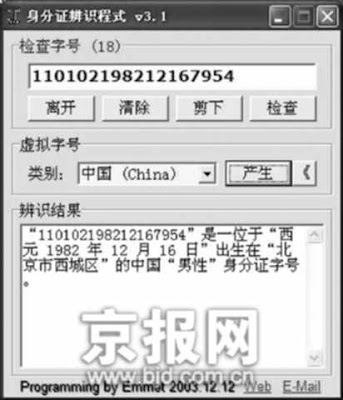 Q: I want to know about the Xiamen real name registration system. Is it okay for you to talk?
A: Alright. It does not matter.

Q: As a Xiamen citizen, what are your views?
A: This is the most ignorant and stupid action that lacked basic commonsense about contemporary civilization.

Q: Do you think a real name system if accomplishable?
A: Not possible.

I predict that if this draft law gets passed, it will only lead to an interesting phenomenon with unique Chinese characteristics — an entire industry of people ready to sell ‘real’ ID numbers/names for the purpose of deceiving the ‘real name registration.’

Something like that industry already exists. It started when the real name system was applied to online games to cut down on addiction. The Inquirer claimed:

An obviously deviant gamer asked at a game forum, “I want to get a game account, can anyone give me an identity number?” The reply from another such gamer, “No problem. I have over two million real numbers. I am interested in retail sales.” Yet another helpfully provided the URL for a website where you can download an ID card number generator. The ID card numbers from the generator match up with real numbers from the Public Security Bureau’s database.

The image at the top is taken from this article from December 2006 entitled “ID Card Generator Now Online, Real Name System Appears Useless”. After the real name system was applied to MMORPGs, these generators became popular for beating the time limit imposed on how long you can play, as well as age restrictions. It could also generate HK, Taiwan and Korean ID numbers (Korea implemented a real name system earlier). The program appears to be available here, should anyone in Xiamen feel like experimenting.