Poster from the Tuku Archive

The First Born was a stage play written in late 19th century San Francisco by Francis Powers. It was later made into a film in 1921. The New York Times described the story:

Even though most of the actors are Caucasian, with the exception of star Sessue Hayakawa, this tragic romantic drama tries to remain true to the spirit of the Orient (or at least what white folks assumed it was like). Loey Tsing, the first love of Chan Wang, is sold into slavery by her father. Although Chan marries another, he still loves Loey; only the birth of a son relieves his unhappiness. He adores little Chan Toy even though he finds nothing to like about his wife. Through his job running a lumber yard in San Francisco, Chan comes to the home of a wealthy Chinaman, Man Low Yek. It turns out that he is Loey Tsing’s master. When Man Low Yek sees the two together, he angrily swears revenge and invites Chan’s unfaithful wife up to the house. She brings Chan Toy, and the frightened little boy falls out a window. Chan finds him crumbled and dead and is overcome with grief. Through the use of his wiles, he causes the death of both Man Low Yek and his wife. Then he and Loey Tsing return home to China together.

In The Production and Consumption of Chinese Theater in Nineteenth Century California, Daphne Lei argues that the original production involved the “first Chinese actor to appear on the English speaking stage in the U.S.” According to scholar Lois Rather, Kim Poon, “a product of local schools”, played the friend of the title character. Unfortunately, at the time it was not clear if Kim Poon was the name of the actor or the character he played, and he did “not have any significant lines, except for some ‘laughter and Chinese exclamations’ like “Hi la, hi la”. It is ironic that the first Chinese actor on the English-speaking stage was a non-speaking character.”

The play was a huge hit, and toured New York and London. On October 6, 1897, a New York Times critic wrote:

The two scenic pictures, representing a street in Chinatown in the bustle of a noonday, and an alley at night with contiguous gambling houses and opium dens, are such as impress the spectator with a sense of reality… it, first of all, pictures the routine of life among the Mongolians of the Pacific coast, but it involves a simple, tragic story which is characteristic of the race, as we Westerners understand it… The music … is performed by a band of thirty-two musicians (some of them armed with Chinese instruments)… The pantomime is expressive and interesting, and all so strange that the spectator shivers a bit, though the sight of the steeple of a nearby Christian church rising above the joss-house is reassuring… The chatter is all in Chinese. There is some sort of trouble about a boycott of one Man Low Yek, ordered by the highbinders… A party of “white devils” is “slumming” in Chinatown that night. The spectator feels that he is one of the party, and enjoys special privileges.

The term “highbinder” is one with a murky origin. The American Heritage Dictionary lists its definition as a “corrupt politician” and a “A member of a Chinese-American secret society of paid assassins and blackmailers.” It lists the etymology as “After the Highbinders, a group of ruffians in New York City c. 1806.” By the late 19th century, it had become a term not only for Chinese gangsters, but for Chinese people in general: 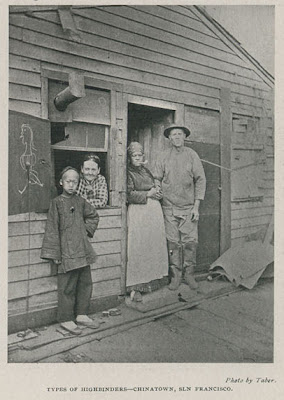 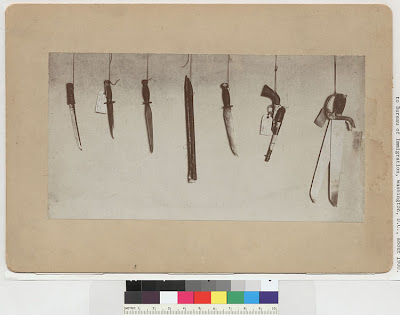 Highbinder weapons circa 1900
The Linguistlist listserv had a thread about it, pointing out

It may be that the Chinese ‘highbinder’ has a discrete origin: thus Asbury _Barbary Coast_ (1933) 185: ‘The _boo how doy_, popularly known as hatchetmen or highbinders, received regular salaries, with extra pay for exceptional bravery in battle.’ Asbury discusses them at length in the succeeding pages but essays no further etymology. ‘Boo how doy’ literally, at least in his translation, means ‘fighting men’.

In 1886, Harpers Weekly had a whole article about highbinders (from the excellent HarpWeek archives):

When the Chinese began to flock to California in large numbers, attracted by gold mining and the promise of work on the overland railroad, they formed for mutual protection what are known as the Six Companies. These were fashioned on the principle of trade guilds. The men from Canton, for instance, formed one company, those from Hong-Kong another. The members paid regular dues, for which the society furnished them hospital care when sick, and guaranteed that their bones should be carefully transported to China in case of death. They were also to be aided in any difficulty with Chinese of other companies or with whites. The company rooms were the head-quarters for the members, where they could get the latest news from China. Outgrowths of these companies, but independent of them, are the Highbinders’ societies… Though known as Freemasons, the Highbinders are really banded together for black-mail and police purposes. If by any factor the confidence of a Highbinder is won, he will have no hesitation in acknowledging that he lives by black-mail…

The mother society among the Highbinders is the Chee Kung Tong, which occupies a substantial three-story building on Spofford Alley, in the heart of the Chinese Quarter of San Francisco… The influence of the head society is far-reaching, and it is doubtful whether its leaders would heed any order from a lesser source than the Chinese Consul. It is even said that the Consul’s order has sometimes been overruled, as there are men in the Chee Kung Tong who acknowledge no allegiance to China… The Highbinder is almost entirely beyond the pale of American law. His secret hiding-places defy the ingenuity of the police; he holds an oath in court in contempt; he can get a score of witnesses in his society to swear to anything which he desires; he has been the chief cause of the difficulty in the enforcement of the Restriction Act in San Francisco.

The Chee Kung Tong, or Zhigongtang (致公堂), was an anti-Manchu organization that would later give critical financial support to Sun Yatsen. While I believe it did have ties to the Heaven and Earth secret society, I seriously doubt it would’ve listened to the Qing Imperial Consul. I’d also point out the Restriction Act mentioned at the end – at this time, Chinese were denied citizenship and even had it taken away (the Chinese Exclusion Act wouldn’t be officially repealed until 1943). As a result of Chinese exclusion, communities had to build their own networks for language, housing, employment, medical care, etc.

Anyway, the play The First Born would appear in London in November of 1897. The New York Times was on hand again, and reported the Chinese ambassador witnessed the performance. It’s not clear who it was who attended the performance, but at the time the Chinese embassy to Britain included some prominent Chinese officials, such as Luo Fenglu and Chen Yifan (who in 1914 refused to sign the Simla Convention on Tibet). Another was Zhang Deyi, who, like Luo Fenglu, was from Fujian, and like Chen Yifan, was a graduate of the Tongwenguan. He accompanied the first fact-finding missions to Europe and America, and wrote about them in the books Strange Tales from across the Ocean 《航海述奇》、More Strange Tales 《再述奇》、and Eight Strange Tales 《八述奇》. Some of these were translated in Diary of a Chinese Diplomat, now out of print. I wonder if Zhang Deyi or his colleagues ever wrote about that play. It’d be fascinating to read their perspective.